The month of May was marked by an increase in the pace of monetary policy normalisation across the globe. Most notably, the US Federal Reserve hiked its target policy rate by 50bps – the biggest increase in more than twenty years – and detailed plans to reduce its $9trn balance sheet starting in June. Across the pond in the UK, where the latest inflation figure reached a fresh high of 9% year on year, the Bank of England raised rates by another 25bps (i.e., +100bps over 4 consecutive meetings).

Despite projections of slowing global growth, the Brent Crude oil price traded higher during the month as the European Union (EU) moved closer to banning Russian oil imports. The EU is still finding ways to win over reluctant member states (Hungary and Slovakia), but broadly aims to phase out supplies of Russian crude oil in six months and oil products by the end of 2022. The Eurozone has been most exposed to the fallout from the war in the form of higher energy and food prices. German inflation reflected the supply dynamics with the latest CPI figure coming in at 7.4% year on year. The European Central Bank (ECB) is now expected to commence its tightening cycle in July, with above zero policy rates projected by the end of the year.

Locally, the SARB saw fit to raise the repo rate by 50bps to 4.75%. It was done in light of an annual inflation figure (5.9%) flirting with the upper band of its target range (3% – 6%) – and also in response to the global backdrop and the possible impact on the Rand. In its decision, the upside risk to inflation outweighed a downwardly revised FY22 GDP forecast 1.7% (previously: 2%). Both short-term impacts like the KZN flooding, and longer-term issues like unreliable electricity, factored into its GDP forecast revision.

On a positive note, May saw S&P Global upgrading the outlook on SA’s sovereign rating from stable to positive. S&P cited the improved fiscal picture as well as the expectation that SA’s current account will remain in surplus for a third year as key reasons for the change in outlook. While all three major agencies have a sub-investment rating assigned to SA’s debt, the risk of further downgrades has been removed with the ratings from Fitch and Moody’s on a stable outlook.

Global assets had a particularly weak start to the month in May as markets anticipated a rate hike by the US Federal Reserve. Despite the negative start, market fears calmed leading up to month end as signs of global inflation peaking and US treasury yields falling (from 3.2% to 2.7%) provided some relief to investors.

Developed and Emerging market equities managed to end the month up +0.1% and +0.4% respectively in US dollar terms but were weak in Rand terms (-1.4% & -1.0%) as the local currency benefitted from peaking inflation suggesting that rate hikes may pause later in the year. The JSE All Share Index was a standout relative performer over the month despite ending the month marginally weak in Rands (-0.4%). Financial stocks continued their bull run (+4.3%) and value remained in favour (+2.3%).

SA Bonds had a volatile month on the back of rising global yields intra month, but ended up +1.0%. The upgrade by S&P to South Africa’s outlook to ‘positive’ as well as the public wage bill hike rejection were both positives for SA bonds. Additionally, the strong commodity prices boosting South Africa’s tax income and exports remains a core driver of positive sentiment towards local bonds and will likely result in foreigners once again purchasing this asset class, given that the real yields on offer in SA remain competitive relative the other EM counterparts.

Ten-year returns are strong for growth assets both locally and globally, and therefore remain a core asset allocation preference in long-term investment portfolios.

May 2022 was a very strong month for the local and global CWM models with standout outperformers being CWM Flexible (+1.5%) and CWM Global Growth (+2.2%). Value outperforming growth [locally (+5.3%) and globally (+3.8%)], ‘paid dividends’ to the allocations made within the CWM models.

Locally, Truffle Flexible Fund (within the CWM Flexible Model) delivered a return of +2.3% in May, well ahead of peers and as a result was in the top quartile of its respective peer group. Similarly, the Orbis Global Equity Fund (within the CWM Global Growth Model) returned +3.8% in the month and plots in the peer group’s top quartile. Both funds have a strong value bias.

The last twelve month returns for the CWM local models remain healthy and well ahead of their respective peer groups. Since inception, all the model portfolios have outperformed their peer group.

Much of the previous decade, post the Global Financial Crisis (GFC) in 2008, was marked by increased globalisation, relative geopolitical stability, low inflation, and record-low interest rates. At a market level, even the faintest signs of any dislocation activated the “Fed Put” – i.e., the pledging of support in the form of additional liquidity by central banks that propped up both equities and bonds.

The pandemic and recent war in Ukraine have potentially upended the status quo.

De-globalisation & Geopolitical Tension: starting back in 2020, supply-chains have come under enormous stress, resulting in shortages ranging across things like semiconductors, industrial chemicals and lumber – more often than not sourced from low-wage countries like China. Having felt the impact of being at the mercy of a foreign exporter, many countries are expected to “onshore” their supply-chains in exchange for increased certainty in times of crisis. The war in Ukraine has added further impetus for reviewing supply-chains, not only because of shortages in wheat, sunflower oil and energy felt across Europe, but also as geopolitics in general reasserts itself as a threat.

Inflation & Interest Rates: the impact of pandemic-induced demand and supply imbalances – together with unprecedented monetary and fiscal responses by central banks and governments globally – is decades-high inflation readings in developed nations. The US (+8.3%), UK (+9%) and EU (+8.1%) are all gearing up to tame inflation and have expressed their willingness to raise rates to levels not seen since before the GFC.

We believe the investor playbook in the next decade will be fundamentally different from the last 10 years. Simply buying passive exposure to a USD large-cap, long-duration index such as the Nasdaq will not secure returns; rather – given the elevated inflation and interest rate environment – emphasis will shift towards value investing, more traditional businesses, and the key inputs of production that solve structural real world problems.

Examples of opportunities the new decade could hold, include the following:

Defence: defence spend as a % of GDP has dropped significantly since the fall of the Berlin wall. With geopolitical tensions ratcheting up, western countries need to make up decades-long investment deficits. The need is felt most acutely in Europe and Japan, where defence contractors have performed poorly for 20 years – exacerbated recently by investor unease about the social responsibility of investing in those firms. We now appear on the cusp of a boomerang-like turn in both fundamentals and sentiment. 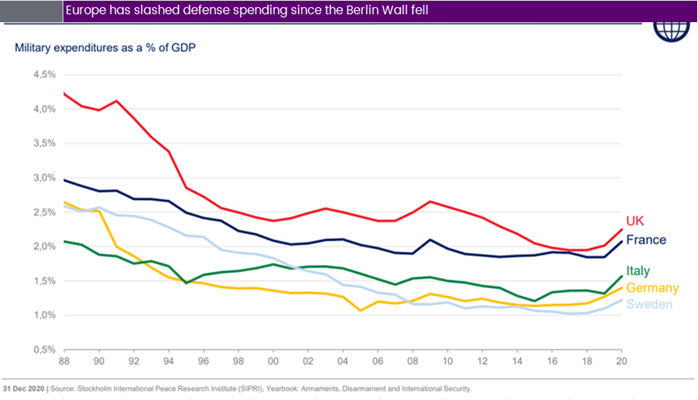 Energy: the hasty transition away from fossil fuels has led to a multi-year, industry-wide underinvestment in traditional energy. Even as prices soar, new supply is not forthcoming as industry participants are loathed to invest new capital in thermal coal, oil and natural gas assets which are likely to be met by increasingly stringent regulation. While renewable sources of energy are crucial to meeting climate goals, energy demand is impervious to the world’s transition timetable and remains as high as ever. Stalwarts like Shell, BP and Exxon Mobil are well positioned to harvest the remaining fossil fuel profits as well as future earnings from green initiatives. 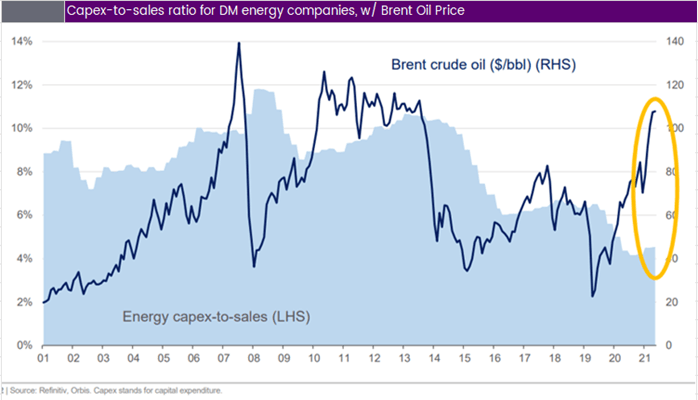 Agriculture: food prices were already rising before the war in Ukraine due to ESG-driven pressure to avoid genetically modified crops. The war has exacerbated the existing shortage with the prices of things like wheat and cooking oil more than doubling. Producers in regions outside of the warzone are under pressure to maximise crop yields. The result? An increase in the demand for fertiliser. However, one of the primary nutrients in fertiliser – nitrogen – comes from natural gas. Due to the war, but also because of chronic underinvestment in additional natural gas supply, the price of fertiliser has tripled. 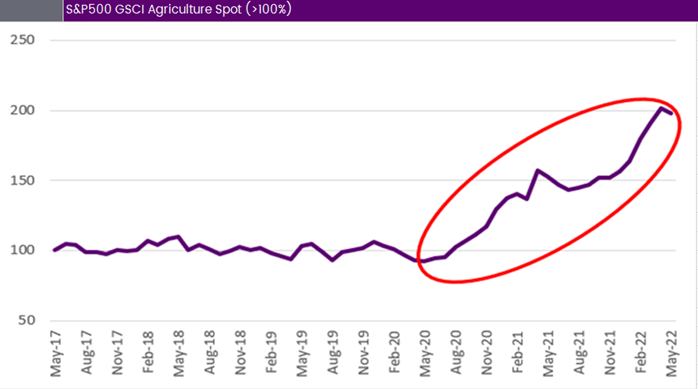 Industrial Metals: the transition to clean energy technologies necessary to achieve the Sustainable Development Goals set by the United Nations, will be an important structural trend over coming decade. Over the next 20 years, total demand for industrial metals related to clean energy production, storage and distribution will quadruple. It will be driven mainly by the development of distribution networks and of the electric car and battery storage industries, followed by solar and wind power generation. Copper, aluminium, nickel, and zinc will satisfy more than 80% of the anticipated total industrial metals demand generated by the coming energy transition.

The graph below shows the future demand for green energy metals relative to its ‘2020’ demand level: 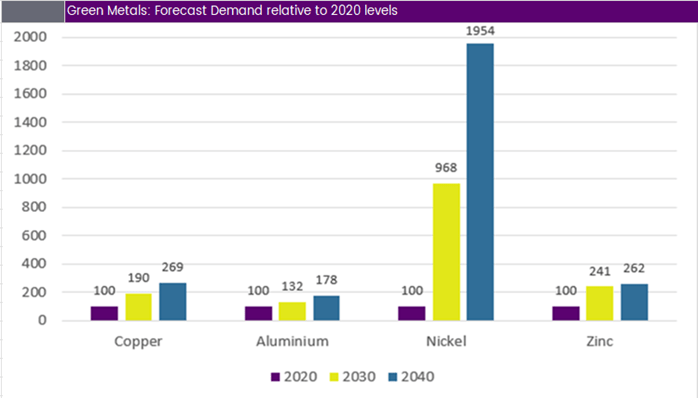 A changing geopolitical, economic and market backdrop – including an ever-increasing focus on ESG-friendly policies – points towards the next decade being very different to the one preceding and implies that investment strategies that worked in the past, may not be as successful going forward. At Core Wealth, we believe our portfolios are well-suited to the changing landscape by researching and understanding these changes, we are able to manage our client’s portfolios to take advantage of the opportunities that will be presented while protecting against risks that will arise.