A tumultuous first quarter of 2022 was followed by a tough April as a number of factors weighed on the major indices (as mentioned below in the ‘Market Commentary’ section). These factors revolve around the US Fed that is expected to hike rates aggressively (which at the time of writing had already resulted in a 0.50% hike in May’s meeting); whilst the war in Ukraine and the Covid-19 outbreak in Shanghai, China are exacerbating supply chain issues.

The IMF’s latest 2022 growth projections for the world, developed market and emerging market, are +3.6%, +3.3% and +3.8% respectively. These forecasts have come down from previous forecasts but while they  are lower than 2021’s strong growth figures (following the Covid induced recession experienced in 2020) the World growth figures are similar to the average GDP growth in the years prior to Covid. A combination of constrained supply in the US, depressed household spending in the UK and stringent lockdowns in China, to name a few, all play a part in lower GDP growth expectations for the rest of this year.

On the local front, intensified load shedding by Eskom and damage to port infrastructure from severe flooding in Kwa-Zulu Natal weighed on local GDP growth in April. The latest ABSA PMI fell sharply to 50.7 index points in April due to the drop in business activity and new sales orders caused by the above-mentioned factors.

The prospect of markedly tighter financial conditions in the US, UK and Eurozone rattled both equity and bond markets around the globe. Although necessary to rein in inflation, the timing of the largely synchronised developed world rate-hiking cycle is concerning, as the factors mentioned above (war, sanctions and lockdowns) already poise the global economy for a slowdown.

Specifically, April saw the market-based odds of a 50bps rate hike by the US Federal Reserve at the May meeting jump from 70% to 100% (which turned out to be accurate). In line with the hawkish expectations, the US 10-Year Treasury yield jumped by 57 bps and the Dollar Index strengthened by 4.7%. The safe-haven appeal of the Greenback was clearly reflected in its relative performance compared to the Euro and Pound in Rand terms: USD (+8.2%); GBP (+3.2%); EUR (+2.6%).

Looking through the impact of the Rand, the JSE ALSI (-3.7% ZAR) and ALBI (-1.7% ZAR) continued to outperform global peers: MSCI ACWI (-8.7% USD) and Bloomberg Global Aggregate (-6.0% USD). Globally, high-growth, high-valuation stocks (MSCI ACWI Growth: -12.2% USD) had a harder time dealing with the geopolitical and macro headwinds than their value counterparts (MSCI ACWI Value: -5.5% USD). Unsurprisingly, the best performing equity sectors – Energy and Consumer Staples (-1.4% and +0.1% USD) – are both known for their inflation-hedging qualities.

Commodities extended their strong performance of the past year. The Bloomberg Commodities Index was up +4.1% (USD) for the month, bringing the YTD return to +30.7% (USD).

On average, the South African focused models outperformed peers by 0.60% for the month, with CWM Flexible outperforming its peers the most (+1.4% outperformance). Contributors within CWM Flexible include over-weights to the energy sector, small caps and the UK, as well as underweights to Latin America, the Tech sector and the US.

The Global USD models underperformed peers by -0.7% (on average) for the month. While an underweight to growth stocks and the USA contributed positively, an underweight to defensive sectors like Consumer Staples and Utilities detracted from performance.  At a fund level, Baillie Gifford (-12.1% USD) and Coronation Emerging Markets (-9.8% USD) were detractors. The former had overweight positions in large growth names like Netflix and NVIDIA, which were down -29.4% and -18.8% in the month, respectively; compared to its benchmark, the latter’s regional choices hampered performance most [e.g. overweight Latin America (-12.6% USD) and underweight Middle East (+3.3% USD). Each of the two funds is included in the models for specific style and regional diversification purposes, and as such, we are not concerned by shorter periods of relative underperformance.

Looking back, the average outperformance of the CWM Global models since inception over 5 years ago is 0.80% p.a.

The war between Russia & Ukraine:

Russia’s invasion of Ukraine creates near-term risks for markets, but also creates uncertainty for the longer-term outlook. The immediate impact of the war, from a financial perspective, was higher energy and food prices as well as disrupted supply chains. In addition, the biggest longer-term issues are expected to be a new cold war between Russia and the West, increased military spending and a further blow to globalization. The war is a defining moment for Europe, which now needs to unwind decades of Russian energy dependence, accelerate its sustainable energy transition, and rebuild military capability. Globally, we believe the invasion will take its toll on GDP growth — with Europe’s economy being impacted the most — as well as continue to create uncertainty regarding inflation around the world. 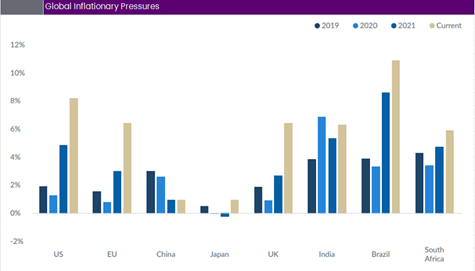 The graph above shows that inflation is generally elevated across the board, but most acutely in the US relative to the country’s history. Other interesting inflation prints around the world are China (currently low, leaving opportunity to further stimulate the economy), Japan (having turned negative inflation into rising inflation) and South Africa (which is currently within the target band and relatively benign).

From an investment return perspective, the CWM models are well positioned to benefit in a rising inflationary environment. Although it is evident that global growth will undoubtedly slowdown this year, we think it could still be above trend, provided the hostilities ease and global energy prices stabilize. While above-trend growth should support equities over bonds and cash, the war in Ukraine has created significant uncertainty, which likely means more market volatility. We therefore caution investors to stick to their long-term goals during these trying times.

The US economy and what to expect regarding interest rates

Despite higher US inflation being a concern for markets and its own economy, we think the US will be the most resilient to the conflict globally, given its energy independence and relatively lower share of commodity consumption in GDP.

Two indicators that attempt to predict the US Federal Reserve’s action towards interest rates are wage growth and long-term inflation expectations. The graph on the previous page shows the labour market in the US (LHS), currently facing wage pressures above 4% (a level suggesting overheating risk). Conversely, the graph on the right shows the 5yr/5yr breakeven inflation rate, which measures investor expectations for the five-year average inflation rate in five years’ time (currently well contained within the 0.5% band).

In essence, surging wages point to more rate hikes this year, but well contained longer-term inflation expectations mean the Fed might not need to go too far into restrictive territory. Currently, we believe that the market is pricing in more negativity and therefore view this as a maturing risk factor for markets.

China lockdowns, stimulus measures and expectations for its equity market

In China, the government recently announced an above-expectation 5.5% GDP growth target for 2022. The country’s economy, however, continues to face pressures, and we expect that more stimulus will be required to get close to the growth target. In addition, COVID-19 still poses a challenge to the Chinese economy, mainly due to the government’s zero-tolerance approach. 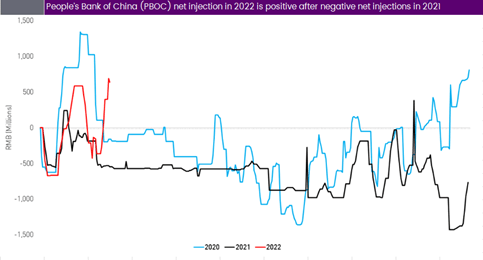 The graph above contrasts the amount of stimulus injected into the Chinese economy in 2022 relative to the previous two years (2020 & 2021). Historically, the performance of China equities has been positively correlated with China’s monetary stance. Following the outbreak of COVID-19 in 2020, China adopted an easy monetary policy, which, in addition to strict COVID-19 measures, helped China rebound quickly from the impact of the pandemic. However, China did not ease nearly as much as the US and EU central banks, leaving its central bank with a great deal of room to further ease monetary conditions this year.

Additionally, China also announced higher fiscal stimulus (~RMB 2 trillion) and higher tax cuts, offering small and medium-sized enterprises (SMEs) nearly RMB 2.5 trillion in tax savings. It is difficult to predict when this will start pushing up Chinese asset prices, but research shows at least a 3-month lag between a stimulus event and a significant run-up in the equity market. We believe China, along with EM asset classes, trade on attractive valuations and therefore we maintain our allocations within the CWM model portfolios.

Over the short term, inflation & investor sentiment will remain a key driver of market performance given the level of uncertainty both globally and locally. Economic growth is slowing more rapidly than expected at the start of the year with very little sign of inflation easing in the upcoming months. Nevertheless, market prices have adjusted to the unfolding events, and bearish positioning is now extreme.

It is a testing time for clients, but we believe the CWM model portfolios remain diversified and well positioned for this period of heightened volatility.