On the local front, the ANC confirmed its view that there remains a need for additional income support for the unemployed. Commentators believe the stance heightens the prospects for the R350 p.m. social distress grant to continue beyond March 2022. The expenditure will partially be financed through a $750m loan from the World Bank (already factored into the November MTBPS financial framework). Encouragingly, Treasury’s revenue and expenses report for the first 9 months of the 2022 fiscal year showed tax revenue jumped by 29.5% y-o-y. If the rate of outperformance is sustained through March, total collections will exceed the November MTBPS projections by R132m. The total budget deficit is now expected to come in below the previously estimated 6.6% of GDP.

At its January meeting, the SARB moved to raise its repo rate by 25bps to 4%. A list of concerns cited includes faster than expected policy normalisation globally, and upside risks to inflation (at 5.9%, the December print was close to the SARB’s upper range). Most prominent in the policy normalisation process is the US Federal Reserve, which released its most hawkish statements yet, indicating that both a rate hike and the possible trimming of the balance sheet could commence in March 2022. The impact was felt in both stock and bond markets, with investors pricing in multiple rate hikes during the year (up to 7 – by Bank of America).

In geopolitics, the Russia-Ukraine tensions are set to remain a notable global concern in the foreseeable future. Talks between the two countries, the US and NATO have been fruitless up to now. The standoff between the superpowers has been a key driver of higher global oil prices. The 1-month Brent crude oil futures ended the month above $90/bbl, bringing its year-to-date gains to almost 16%. The increasing price pressures owing to heightened energy concerns, coincide with a US Dec 2021 CPI print of 7% – the highest in over 40 years.

A more hawkish US Federal Reserve rattled growth equity investors in January. Small changes in discount rates from historical low levels, make a significant difference in the value of long dated cashflows, resulting in US technology shares selling off aggressively throughout the month. Investors thus rotated into “cheaper”, shorter dated value and other cyclical shares.

The net result was most global equity markets delivering negative returns but there were a lot of divergence between sectors and styles. The rand strength of over 3% versus major currencies exacerbated the weak global equity returns as evidenced by the MSCI World and EM indices ending the month down -8.2% and -4.9% respectively in the table above. Conversely, the SA equity market bucked the trend and returned +0.9% during the month, benefitting from the resource (+3.6%) and financial (+3.4%) sectors.

On the fixed income side, US 10-year bond yields rose on the back of increasing concerns around the inflation outlook. SA 10-year bond yields followed some of this move higher but was then supported by the stronger Rand. As a result, SA Bonds managed to end the month in green at +0.8%.

Given the extreme risk-off environment experienced in the listed equity and property space across the globe, it is no surprise that only CWM Income ended the month positive in absolute terms. While most of the models were negative during the month, it is important to note that when measured against peers, all the CWM models outperformed significantly in January. On the local side, CWM Flexible delivered +1.5% alpha while on the global side, CWM Global Growth delivered +2% alpha.

Most of this outperformance can be explained by the value bias incorporated in our model portfolios. Below we quantify the outperformance of the two styles locally and globally:

The graph below looks at the return of the FTSE/JSE All Share index and its PE ratio since Dec 2009. The overall period can roughly be broken down into 3 sub-periods, with cumulative returns indicated in brackets: 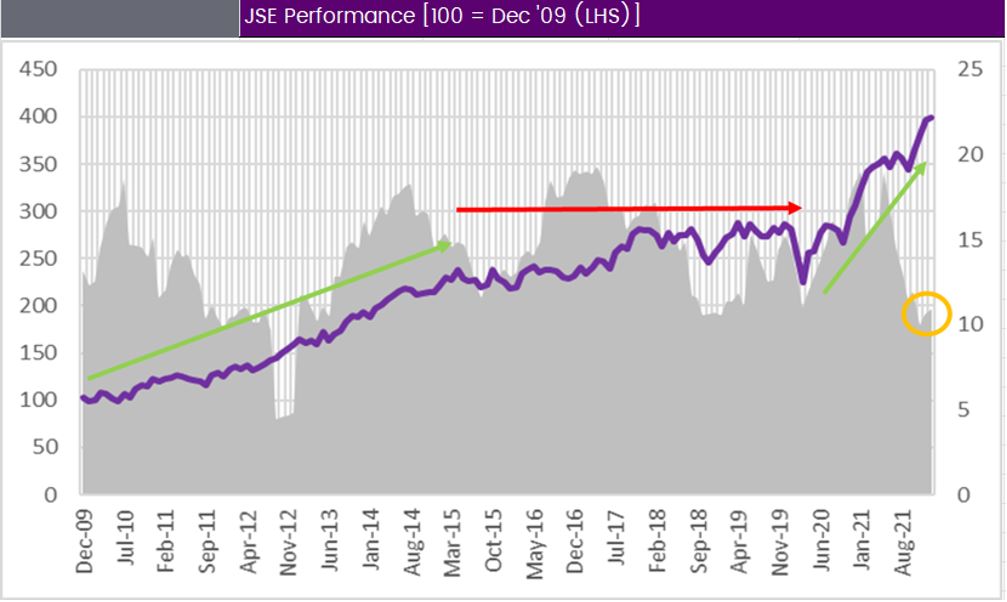 After the initial recovery period after the Great Financial Crisis (GFC) – where equities rallied more than 100% in 4.5 years – the market ground to halt over the next 5.5 years, a period during which SA was plagued with slow economic growth and relatively high equity valuations.

What should be clear from the graph, however, is that – despite the March 2020 to January 2022 rally – the trailing 12-month PE ratio has settled at a relatively low level. At 10.9, the ratio currently represents a c.22% discount to the average PE over the full period (13.9). At these valuation levels, local managers believe there is still significant upside to fair value, despite a harsher discount rate.

To put our local opportunity set into perspective, the following table and graph looks at various metrics that measure the valuations of global equity markets:

As valuations are a key driver of subsequent investment returns, our model portfolios remain underweight the US equity market, and overweight in the areas offering value (SA, UK, Japan).

As it turns out, our view is also positive on SA government bonds. While we are not naive about the potential of a government default, we believe that investors are more than adequately rewarded for this tail risk, especially on the long-end of the curve.

The scenario analysis above looks at government bonds with different maturities (from shortest to longest). Even at the front-end of the curve (R186), investors earn a real yield (a yield above inflation) of approximately 2.9% per annum. However, it’s on the longer-end where the value truly lies. At current inflation expectations, the 2040 bond offers a real yield of c.4.3% p.a. if held to maturity. Should yields decline to fair value over the medium term, the total real return jumps to 5.2% per annum.

Should a sovereign default event occur (government can’t repay the bonds), it is only in the event where bonds lose 50% of their market value, that the front-end of the curve (the shorter-dated bonds) starts to deliver negative returns. Due to the steepness of the curve, despite a 50% drop in their market value, the longer-dated bonds are still sufficiently cushioned by interest coupons to keep performance positive.

Therefore, we believe longer-dated bonds are the preferred holding in our local fixed interest allocations (as opposed to short-dated bonds and cash).