The invasion of Ukraine by Russian forces in the last week of February brought a dramatic shift in focus for the world.  Russian President Vladimir Putin is unhappy about North Atlantic Treaty Organisation (NATO) forces intruding on Russia’s western border, with Ukraine representing the last major buffer between NATO members and Russia.

Below are background details to contextualise the current situation between Russia and Ukraine:

On the local front, SA Finance Minister Enoch Godongwana presented the 2022 budget speech in February. Key takeaways from the speech are summarised below:

The Moscow Exchange in Russia (MOEX) lost c.-30% of its value during the month. The losses were exacerbated by the plunge in the value of the Rouble against the Dollar of c.-20%, leaving international investors in the Russian Equity Markets out of pocket by a cumulative c.-50%.

Global Equity Markets were a mixed bag. Of the larger developed indices tracked, the German DAX declined the most (c.-6.4% – USD), with its stronger economic ties to Russia leaving it relatively exposed. The S&P500 lost c.-3% – although the decline had as much to do with the eye-watering inflation print (+7.5% year-on-year) released earlier in the month, than with developments in Russia. While the FTSE100 also managed to eke out a small gain (+0.3% – USD), it was the FTSE/JSE All Share index that impressed the most (c.+3% – USD), supported largely by our strong Resources Sector (c.+6% – USD). The Rand strengthened marginally against the Dollar (c.-0.1%).

Below we highlight the performance of a few locally listed stocks with operations / markets in Russia, or who could benefit through the commodity / energy channels:

The impact of Russian equities on our models was limited due to the low effective portfolio exposure. CWM Global Growth had the highest exposure (+1.1%). It was mainly through its 4% allocation to Coronation Global EM (-13.1% in ZAR), which has a +9.9% allocation to the warring country. Its Russian investment is largely to a local retailer called Magnit – a defensive play that has on-shored most of its supply chain since 2014 and with flexibility to pass on inflation increases to consumers. Other detractors (Baillie Gifford: -4.1% in ZAR | PIMCO Emerging Market Bonds: -4.6% in ZAR) fell prey to a combination of inflation fears and EM contagion risk, but changes nothing about the long-term expected returns from said funds.

Broadly speaking, the top performing funds within the CWM Model Portfolio fund range displayed above-average Value-Style metrics for fund holdings (JSE Value Index = +8.4% | JSE Growth Index = 0.5%), as well as elevated exposure to the Basic Materials and Energy Sectors. The top performers also had a large SA Equity weighting and an underweight to North American equities, confirming the relative outperformance of the local bourse (+2.9% vs. -2.7% for MSCI ACWI) over the month. 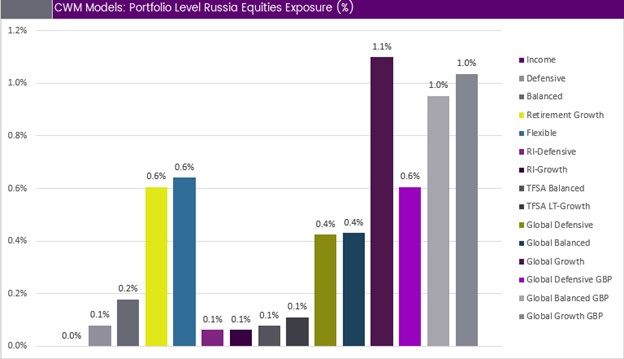 We acknowledge the current situation in Ukraine to be traumatic for many. But as stewards of capital, our clients require us to be level-headed and continue to manage the model portfolios in a prudent manner. Below we provide the outlook for the current situation, which at present remains fluid.

A good starting point would be to look at Russia and Ukraine’s economies in terms of their overall weighting to the rest of the world. Two important indicators to consider are a country’s contribution to global economic activity, and what percentage that country represents in terms of the world’s population. At the time of writing, these two countries contribute c.2% towards global economic activity and make up a combined percentage of c.2.4% of the world’s population, with Russia carrying the largest weight in both indicators [% of global GDP (1.8%) & % of global population (1.8%)]. This is shown in the graph below relative to the top five other countries in which Russia and Ukraine ranks 12th and 50th respectively.

Interestingly, despite Russia representing a small portion of global GDP, the country contributes significantly towards the global supply of the various commodities [i.e., palladium (37%), oil (10%), wheat (11%), etc]. Even more interesting is the fact that Russia’s energy commodities play a meaningful role in the European Union’s energy requirements, currently contributing a quarter thereof.

Many of these commodities are already expensive, primarily because of the COVID-19 pandemic, and now stand to increase even further. Commodities, at the broad definition, are inputs into the production of numerous consumer goods (i.e., bread, petrol, etc.). Energy for example makes up a large portion of global inflation and thus the concern is that inflation will continue to increase. Overtime, we expect the supply response to normalise, thereby allowing inflation to moderate as well. In the interim, companies that are linked to various commodity prices stand to benefit and we believe that the CWM model portfolios are positioned well to participate in the strong up capture.

Given the transitory nature of these inflationary pressures, and the fact that central banks typically ignore food and energy inflation in setting monetary policy, we think that global central banks will not hike rates more aggressively in response to the elevated commodity prices. On the contrary, we expect major central banks to potentially proceed in a more measured way, while the prospect of a military conflict weighs on sentiment and likely reduces some demand-pull inflationary pressure.

In extreme times such as the current situation, it is useful to let history guide our thinking as investors in order not deter from our long-term goals. The graph below shows global equity (i.e., S&P 500 index) drawdowns around various historical geopolitical conflicts going back as far as 1962. Out of the 16 events below, only 5 events caused the index to fall more than -10% while only 3 events caused the index to enter a bear market (i.e., when prices fall -20% or more).

In addition to using history, we leverage expert insights from many asset managers/economists and have come to a consensus view that the current conflict is not expected to escalate into a major world war. It is therefore unlikely that investors will experience significant losses in funds not directly exposed to the conflict or related sanctions.

In conclusion, the outlook for both equities and bonds from this point remains less clear than for some time. The Russian invasion will continue to weigh on both sentiment, capital flows into emerging markets, and even consumer behaviour. When these factors are considered in combination with energy and commodity market tightness, investors can expect ongoing volatility until the political situation stabilises.