October has been a strong month for equity markets across the board with very little newsfeed driving performance, other than the release of strong corporate results exceeding investor expectations.

Key topical issues discussed in prior months that continued to dominate headlines during October:

These issues above will be unpacked in further detail in the outlook section as well as how they impact equities and bonds.

A hawkish shift from the Federal Reserve has caused the rand to weaken and end above the psychological 15-level against the greenback for the second month in a row. For October, the rand lost 1.6% against the dollar, 2.3% against the euro, and 4.1% against the pound. The significant decline against the pound is also attributable to monetary policy shake-ups – a rate hike is expected from the Bank of England in November. The move would make the UK one of the first developed nations to start tightening financial conditions.

Equity markets rebounded off lows hit in September as concerns over prolonged inflation – coupled with slowing growth – were out-weighed by a robust start to the third-quarter earnings season. It spurred appetite for riskier assets that led the MSCI All Country World Index to gain +6.2% (ZAR). Developed markets outperformed their emerging counterparts with the MSCI World Index printing +6.8% (ZAR) against +2% (ZAR) from the MSCI Emerging Markets Index.

The South African stock market tracked global stocks higher with the FTSE/JSE All Share Index delivering +5.2%. The gain was largely on the back of stronger commodity prices lifting the shares of miners. Resources delivered a stand-out +8.4%, followed by Industrials with +6.7% and Financials at -2.9%. In contrast to Developed Property Markets (+6.4%), the Local Listed Property sector took a breather, returning -1.7%. However, it is still the best performing asset class over the last 12-months (+65.9%).

The local yield curve flattened during the month, with shorter-term bonds selling off (<12 years), and the longer-end (>12 years) posting a modest gain (+0.4%). The net result is the Beassa ALBI returning -0.50%. The yield curve is currently pricing in 25bps rate hikes by the SARB every meeting for the next two and a half years, which many believe to be excessive.

Out of the Core Wealth model underlying fund range, the top performers were the developed market property funds (included in the Global USD models, Retirement Growth and TFSA Long-term Growth). Not only did the funds perform well in absolute terms (+7.6% on average), but compared to peers they were top quartile achievers, pointing to favourable stock picks. The positive momentum in the sector can be attributed to strong Q3 earnings results: out of the 12 S&P500 sectors, the listed real estate cluster surprised analysts the most with the highest propotion of companies exceeding expecations (93%).

The allocation towards developed world property in our models is generally quite small (2% – 4%), however, and was largley offset by the larger exposure to local listed property (±10% in RI-Defensive, RI-Growth and Retirement Growth). As mentioned before, the asset class took a breather after a blistering performance over the last 12-months.

Among our top performing underlying funds, the Value and Size (i.e. smaller caps) factor representation, as well as Emerging Market exposure, were the lowest it has been at any time over the last year. Given our preference for valuation driven strategies (around 63% of our funds), smaller caps and EM, it s strong signal that market dynamics posed somewhat of a headwind to many of our managers.

As a point in case, the Ninety One Global Franchise fund was October’s top performing fund (outside of the developed world property funds). The Ninety One fund is a large-cap, growth orientated strategy with a chunky allocation to the US (c.66%) and Tech (c.30%). While most of our models are purposefully underweight the US and Tech (given lofty valuations), our Globlal Growth model has a 17% allocation to the Global Franchise fund, and added the most ouperformance relative to peers at +0.8% (in USD).

Overall, our local models have delivered an average excess return of +5.2% (in ZAR) measured over a 1-year period, and +4.3% (in USD) across our global models.

A series of regulatory interventions started after China’s Financial Stability and Development Committee (FSDC) raised concerns around technology-enabled unsecured lending. This resulted in a wipe out of around half of the value of China’s tech sector in just 5 months. While there have been fundamental reasons to explain part of the selling pressure, the severely negative price action has been compounded by an equally significant level of narrative-driven selling, which we view as unjustified.

From a constructive perspective, China’s government objective behind the regulatory interventions seem to embody an underlying reform agenda that aims to curb anti-competitive corporate behaviour, redirect resources to more strategic growth industries and ensure a more equitable distribution of wealth. These reforms result in healthier competitive environments (a net positive for cash flows and growth) and ultimately bode well for secular growth, which if proven to effectively contain living costs, would help China wean itself off its dependence on exports.

To unpack this further and understand the opportunities herein, we look at an easy example of showing the magnitude of the unjustified selling pressure, to indicate the ‘bargain prices’ investors can enter the market at or potentially increase their exposure. This is shown below with reference to the Nasdaq Golden Dragon China Index, which tracks the performance of 99 US-listed American Depository Receipts (ADR) for China-domiciled companies: 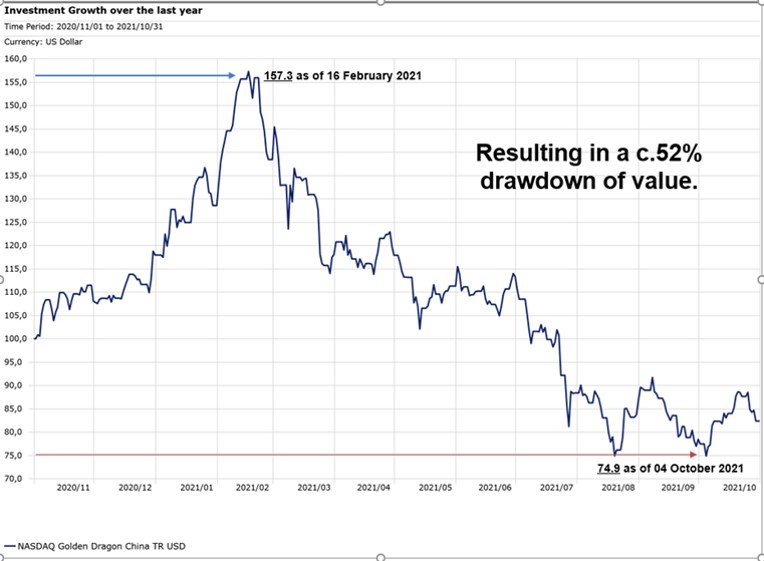 As can be seen above, the index (rebased to 100) lost just over half its value in less than a year. We view this as irrational selling and believe that once the dust settles, fundamentals will once again become the primary driver of stock prices in this space, which from here would imply meaningful upside.

In our previous wrap ups, we have mentioned the spill-over effects a default by Evergrande could have on the savings of thousands of households in China. Since then, we have seen the Chinese regulator getting involved in attempt to slowly defuse the situation. The problem is however that there are other ‘Evergrande’ companies in the system with the potential to explode into a full-blown crisis and therefore, we view this situation as ongoing.

Given the probability for future company defaults, it is not surprising that investors are becoming more negative towards China and consequently towards emerging markets (EM) in the short term. EM currencies, shares and bonds have lost value on the back of this negative sentiment. While the situation is difficult, markets tend to recover, as evidenced by equity market performance in October. Overall, we believe that sentiment towards EM assets is unduly negative now and given the attractive valuations on offer, and more so after the sell-off this year, we maintain our overweight allocations within the CWM models.

US Fed slowing down bond purchases

At the FOMC meeting in September 2021, the US Federal Reserve (Fed) signalled that a tapering of its bond purchasing programme was imminent. This was noted in previous meetings and at the time of writing, the Fed decided to leave the Federal Funds target interest rate unchanged at a range of 0% to 0.25% but announced that they will begin to reduce their monthly asset purchases by $15 billion each month. In assessing the impact on bonds, we let history guide our thinking and look towards what previously happened when central banks tapered their bond-buying programmes.

In April 2013, the US 10-year bond yield was around 1.9% when the Fed Chair, Ben Bernanke, revealed his plans to taper bond purchases. Months later, the Fed formally tapered its bond purchasing programme at its meeting held in December 2013, at which point the US 10-year bond yield had risen to 2.9%. A 1% move in long dated bond yields are detrimental to the capital value of bonds as it highly sensitive to interest rate changes. Interestingly, this rise in bond yields started once the market was warned of the upcoming taper and surprisingly, in the three months following the December taper, bond yields rallied to 2.7% in March 2014 and continued to rally for a while thereafter as the graph below shows.

The main takeaway from this historical data is that bonds sell off on the expectation of a taper, although we note that when the taper is formally announced bonds seem to gradually recover again. This has not only transpired in the US as a similar phenomenon occurred in Europe where bonds sold off leading up to European Central Bank (ECB) taper and then subsequently recovered thereafter.

Bringing this closer to the current time, US bond yields have again sold off in anticipation of the taper, rising from 1.3% at the September Fed meeting to c.1.6%. We think the fact that the taper was far more broadly expected and that the bond buying, as a proportion of issuance, is far lower than last time means that the market reaction should be less pronounced than before. For now, however, the sell-off in US bonds has had a knock-on effect on bond yields across the globe.

In the recent months, the price of oil has risen markedly higher as countries are using it as a replacement for gas because the natural gas market is in structural deficit, with low inventories. The move over to oil for energy production has led the Organization of the Petroleum Exporting Countries (OPEC) to increase its supply by 400 000 barrels per day, an increase which still falls short of the additional demand and as such, we expect oil prices to remain high.

This is important as it directly impacts the price of petrol, and therefore transport costs, which represent a significant portfolio of the inflation basket for emerging market countries. As inflation rises, EM central banks will need to hike interest rates to maintain price stability. We have seen this playing out in several EM countries, but South Africa have yet to follow suit. Financial markets are prone to overreaction and, for now, are pricing in that the South African Reserve Bank (SARB) will hike interest rates at every meeting for the next two and a half years. These expectations are extreme and are not based on fundamentals which unfortunately pushed SA bonds weaker. This points to a very attractive pricing on SA Bonds which means attractive returns from the asset class in future.

Expectations for bonds and equities

Historically, bond prices reverted to their averages over time. At times of extreme pessimism, as we are seeing now, the yields are at above average levels and are expected to recover in time. Investors buying bonds, particularly SA bonds, get the benefit of being paid their interest distributions (i.e. the higher yields on offer which for SA are significantly above inflation) while they wait as well as the price appreciation expected once these yields revert to normal.

In terms of equities, valuations remain attractive for emerging markets as mentioned above, and SA fits into that attractive space. Historically, lower global bond yields (currently valued with unattractive return prospects) have been a tailwind for global equities. When looking at their own history, global equities are expensively priced but when measured against bonds, global equities are cheap relative to historic levels. This gives global equities breathing space before higher yields become a problem. As we noted with the Fed beginning the tapering programme, yields are expected to recover and stabilise which should be a supportive calm for both equities and bonds.