Global news in 2020 was dominated by the unfolding Covid-19 pandemic. The first human case was identified in December 2019 in Wuhan, China – when a patient sought medical help for pneumonia-like symptoms. After similar reports surfaced in Wuhan, and after closing a Seafood Market suspected of being the centre of the outbreak, China notified the WHO on the 3rd of January 2020.

While screening restrictions at Wuhan ports of entry were implemented by January 14th, Thailand had already reported its first case on the 13th, followed by Japan on the 16th and then Hong Kong, Taiwan and the USA on the 21st. Two days later, the WHO decided not to declare the outbreak a Public Health Emergency of International Concern; however, after cases were reported in a total of 20 countries across the globe, it reversed course and on January 30th declared a pandemic.

Above fatalities are despite extreme lockdown measures implemented by most governments. The impact of these “shelter at home” policies was an unprecedented decline in economic activity, which only accelerated with the virus’ arrival on American shores. Equity markets retreated into bear territory (a decline of +20%) at the fastest rate on record. Between 19 February and 23 March, the S&P 500 shed 34%, while indices in harder hit countries fared even worse: Italy’s stock market collapsed 42% and Brazil’s Bovespa, 45%.

Various other measures of economic well-being were also sounding the alarm bells: commodity prices collapsed under the weight of declining demand expectations (sellers of crude oil had to reimburse buyers for taking physical delivery, selling their barrels at -$37.68); global credit spreads spiked; India’s services PMI reading tumbled from 49.3 to 5.4 (anything below 50 signals contraction); and the UK was bracing itself for its biggest economic contraction since 1709 – expecting a 13% drop in GDP (current estimate: 11.2%).

On the domestic front, SA recorded a 51% decline in GDP in Q2 (compared to USA: 31.4% decline), followed by a 66% increase in Q3. Despite the rebound, economic output is only expected to return to pre-pandemic levels in 2024. A fiscal rescue package totalling R500bn pushed expected debt to GDP to 81.8% for the current fiscal year (from 65.5%), with levels only expecting to stabilise at 95.3% in 2025/2026. 2.2m jobs were lost in Q2 at the height of the crisis, with the biggest blow struck to low-income earners.

Despite the negative economic reports, investors who had the steel to invest in April at the market lows, have been handsomely rewarded, thanks to the biggest joint fiscal and monetary stimulus since World War II. Global Central Bank assets have increased by $9.2trn dollars in 2020 and has been the driving force behind the market recovery (both in equities and bonds). Owing to the acceleration of many technology-driven trends such as digitalization and online shopping, the Nasdaq reached a new all-time high as early as 8 June (up c.46% in dollar terms for the year). Locally, if you look behind the headline JSE performance (+7%) at the respective Style indices – Growth (+19.2%) and Value (-5.94%) – we see the trend holding true in SA as well.

Even as commentators were becoming increasingly vocal about lofty equity valuations – especially in the US – the positive news of the higher-than-expected efficacy rate of the Pfizer and BioNTech vaccines (90%) on the 9th of November, provided the impetus for global equity markets to record the best-ever November and the highest one-month equity market performance since 1987. It also marked, some believe, the beginning of a long-awaited rotation into more cyclical / value-driven stocks.

Finally, emboldened by a combination of tailwinds (additional stimulus, easing geopolitical tensions and enhanced trade under a Biden administration; a boom in commodity prices; a possible Brexit deal and widespread vaccine deployment), investor risk appetite returned in the last two months of the year, with high-yielding Emerging Markets (EM) the main beneficiary. By mid-December, the MSCI EM Index had clocked its 7th-straight week of gains, and ultimately finished one of its strongest final quarters in a decade. The Dollar came under significant pressure, with the Dollar Index ending the year c.7.7% lower.

Below are the results for global markets as it stood on 31 December 2020:

Markets in the Month

During the month of December, the CWM local models were positive across the board, with the high equity and unconstrained mandates (Retirement Growth and Flexible), performing best (+3.21% and +3.36%, respectively). Besides CWM Balanced, all local portfolios either matched or outperformed ASISA peers.

On the global side, in Dollar terms, the CWM Global Defensive and Global Growth delivered 2.61% and 4.47%, respectively for December 2020, comfortably beating peers.

To provide some context for Model Portfolio returns year to date, it is useful to break them down into the 3 distinct time periods that characterised 2020: Jan – March (“Crash”), April – October (“Lockdowns”), and Nov – Dec (“Vaccines”). The chart below looks at the distribution of the CWM Models’ alpha (excess return relative to ASISA peers) over the 3 periods.

Given the higher relative risk profile of the CWM models, it comes as no surprise that less downside protection is afforded during bear markets, as evidenced by negative alpha’s coinciding with the Crash period. In both the Lockdown and Vaccines periods, alpha generation was positive. However, the models were truly in their element from November onwards when the global rotation out of the “lockdown winners” (i.e. tech stocks) into value sectors (financials, industrials, energy etc.) accelerated.

Since the start of the new year, various loose ends carried over from 2020 have also reached a conclusion – not least of which the outcome of the Georgia Senate Race confirming a Blue Sweep of the USA. With Democrats now in control of both Houses of Congress, it opens the door to unfettered additional fiscal stimulus. Coupled with the finalisation of the Brexit deal and the commencement of vaccinations in emerging markets, the positive backdrop for value investing that began in November 2020, is further strengthened.

While developed market bond yields have been trending lower for decades, the pandemic has accelerated the trend through a combination of a global flight to safety and central bankers slashing policy rates to 0% (or below 0%) in a bid to stimulate economies. The highest 10-Year Sovereign Bond yield currently available among the G10 nations belongs to the USA (offering 0.922%) and the lowest to Germany (-0.603%). Five of the group members are in negative territory. In fact, the pandemic has caused the global stockpile of negative yielding debt to reach a new all-time-high of $18trn.

In the emerging world, policy rates were also lowered (SA cut its repo rate by 3%) – which anchored the short end of the yield curve. However, due to additional borrowing and ballooning debt-to-GDP ratios, the perceived risks in longer-dated government bonds heightened which resulted in higher government bond rates in developing nations.

Risk appetite in 2021 is expected to increase proportionately with the successful deployment of the vaccines. As the story unfolds, the $18trn worth of negative yielding debt will seek better returns. Given the current relationship between 10-year Government Bond yields and inflation expectations, the emerging markets offering the highest prospective real returns are South Africa (4.8%), Indonesia (4.4%) and Brazil (4%).

The other interesting dynamic is that – because short-term interest rates have been compressed (the difference between SA’s policy rate and that of the USA is relatively smaller), the cost to hedge the currency risk has dropped substantially. It means that carry trades (where investors buy higher yielding bonds (e.g. EM bonds)) can hedge out all currency risk cheaply, making the carry trade very attractive and lucrative. When accounting for the cost of hedging, Brazil (2.2%), South Africa (1.5%) and Indonesia (0.9%) still come out on top.

We maintain our conviction in the research that shows shares with attractive valuations exhibit an increased probability of delivering superior long-term returns. One such study was conducted by Star Capital in 2016, using the Shiller PE ratios of the S&P500 Total Returns index dating back to 1881. The outcome of the study confirmed the conclusion of Robert Shiller’s original work: at points in time where the cyclically-adjusted PE ratio (CAPE Ratio) exceeds 22, returns are likely to be flat over the subsequent 20-years. 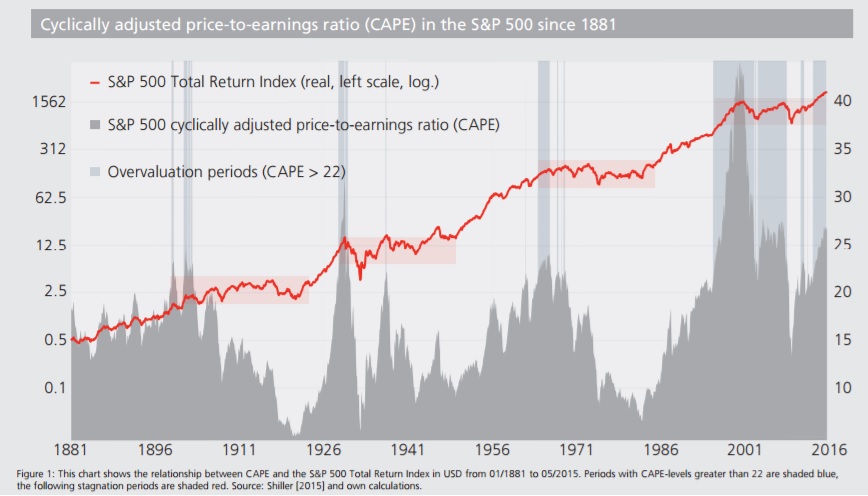 Towards the end of 2020, the S&P500 had a Shiller PE ratio of 29.8. Collectively, Developed Markets (DM) were trading at an average ratio of 23.4. In contrast, Emerging Markets (EM) were trading at a more reasonable 15.7. Notable exceptions in the broad categories include the UK (11.8) and Taiwan (22.4). Nevertheless, the general observation holds true: EM’s remain more attractive in terms of valuations and – on a balance of probabilities – should outperform in future. 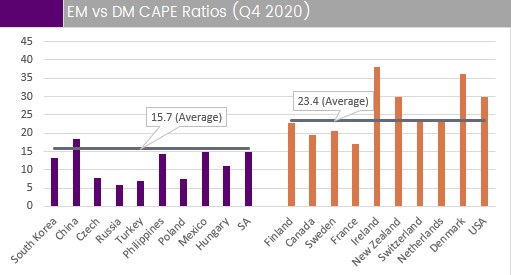 Despite what looked like the start of a potential rotation into value starting in November 2020, growth stocks outperformed value stocks by the most on record last year. In addition, growth has outperformed value every year since 2009, apart from 2016. 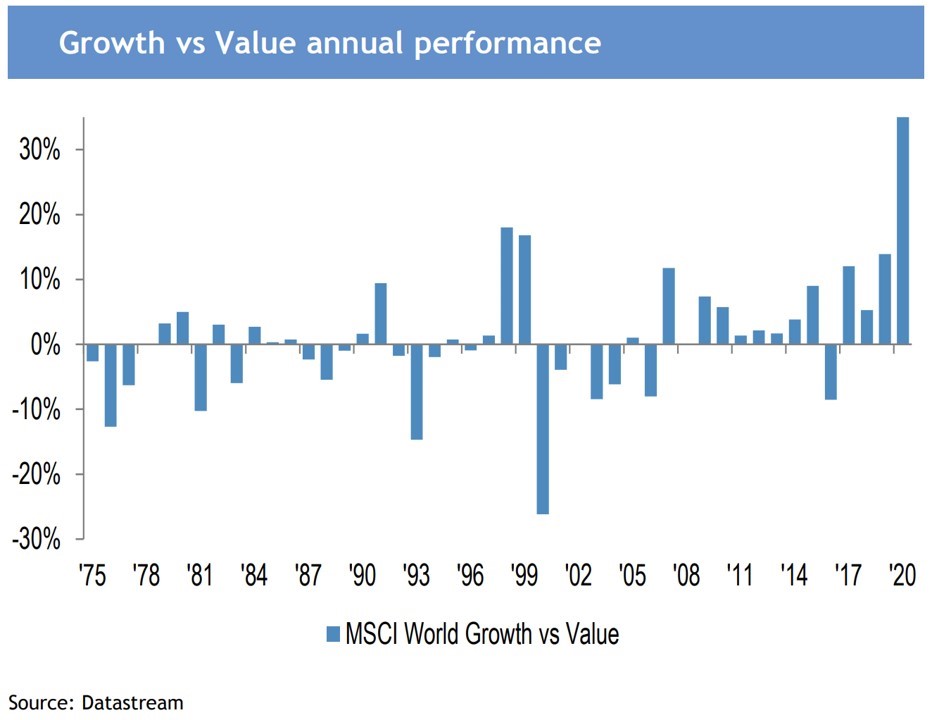 Assuming a successful roll-out of vaccines and the gradual (full) re-opening of economies, growth will become less scarce in 2021 to the benefit of value stocks. Also, were interest rates to rise given the prospect of growing inflation, growth stocks will be penalised disproportionately (this is a function of the longer duration of their future expected cash flows).

However, Central Banks seem committed to a “lower-for-longer” policy – and are willing to let inflation breach long-term targets. In an inflationary environment, players with greater pricing power and relatively stable input costs have the advantage. In this scenario, market dominant tech stocks – with little cost-push inflation and greater leverage to set prices – should have an edge over financials, industrials and other cyclical sectors. Also, some would argue that the “FAANGM & Co” stocks’ lofty valuations are justified given 1) record low interest rates and 2) structural changes to the economy, in particular the pandemic-accelerated tech trends that are unlikely to be reversed under the new normal: e-commerce, artificial intelligence, cloud computing, video streaming, cybersecurity etc.

In these uncertain times, the most prudent approach is one that stresses diversification as much as possible: incorporating multiple managers with different styles (value, growth, quality, active and passive) and overweighting those regions that are more reasonably priced.

Many listed property companies used the lockdown period to strengthen their balance sheets, either by not paying dividends, selling assets or even raising equity capital. And since the positive news on vaccines was released in November 2020 listed property has recouped a third of the losses incurred earlier in the year.

At this point, the attractive valuations might be justified given the uncertain final impact of covid on the industry. Going forward, we believe that traditional Office and Retail REIT’s will struggle to compete with the Datacentre, Warehousing and Logistics, and Infrastructure sectors. To access any sort of market depth in the latter sectors, however, one will have to look beyond SA towards the international markets, notably the USA.

The overall positive return from most asset classes and therefore a typical balanced portfolio in a turbulent 2020 reaffirmed the principle of sticking to long term strategies.  While we don’t expect the future to be without incidence, there are more helpful tailwinds and therefore better prospects in most asset classes in future than what we have seen over the past 5 years.