On the local economic front, Stats SA confirmed that a third straight month of increased trade surpluses had been recorded in March (Jan: R12.4bn, Feb: R28.9bn, March: R52.8bn). Exports grew at +16.5% month-on-month, with slower import growth (+1.6%). Annual inflation ticked up to 3.2% in March (Feb: 2.9%), mainly due to sharp increases in energy and fuel prices.

In the US, 1Q21 GDP growth came in at an annualised +6.4% – now approaching its pre-pandemic size again. In addition, the Labour Department reported an increase in non-farm payrolls of +916 000, lowering the unemployment rate to 6%. Pointing to shifting consumption patterns as the economy re-opens, the Institute for Supply Management printed a Services PMI level of 63.7 – the highest level since the survey started in 1997.

The Federal Reserve left interest rates and asset purchases ($120bn p.m.) unchanged in its latest policy decision. It hinted at easy monetary policy for an extended period despite a strengthening economy and rising inflation. The European Central bank also kept refinancing rates at ±0% and aims to continue its pandemic emergency purchase programme until March 2022.

In 1Q21, China’s GDP grew at a record annualised rate of 18.3% (compared to 1Q20, when the economy shrank by 6.8%). A more relevant number, perhaps, is the muted quarter-on-quarter figure of 0.6% – pointing to struggles faced by smaller firms and the services sector. Demand for goods, however, was robust, with spillover effects in major trading partners like Germany, who recorded a record increase in its Manufacturing PMI (57.9 to 62.5), largely due to surging demand from the Asian powerhouse.

Finally, other than a temporary setback with the Johnson & Johnson vaccine (6 cases of a rare and severe type of blood clot had been reported by patients), global inoculation efforts have been ramped up across the board. The European Commission announced a new deal with Pfizer and BioNTech to deliver 50 million additional doses of their shot in the second quarter, while South Africa signed an agreement for 20 million doses. The standout negative for the month was India, whose 7-day average new cases peaked at 370 000.

The Rand appreciated during April on the back of rising commodity prices and a strong reported SA trade surplus of R52.8bn. Over the last year now, the Rand is 20% stronger against the Dollar and around 11% stronger against the Euro & Pound. Ending the month at R14.38/$, we believe the currency is trading in fair value range.

Emerging market returns were muted during the month (up +0.7%) as regulatory pressure in China caused stocks such as Naspers/Prosus and Alibaba for instance to fall. As Naspers/Prosus holds a significant weight within the FTSE/JSE All Share Index, SA equities also delivered a modest return of +1%. Rand strengthening has been the main reason for the +0.3% outperformance between SA & EM while developed markets (MSCI World) delivered the strongest equity return at +2.8% for the month. Longer term returns remain robust with SA equities leading the way over the one year and all three indices tracking close over the last fifteen years.

SA Listed Property surged in April (up +11.7%) lifting its one-year performance to +40.3%, overtaking the other asset classes as the top performer. The sector has shifted away from balance sheet concerns to the potential of an earnings recovery. Driving forces behind the rally in April were a myriad of factors including an increase in domestic demand, better than expected macro indicators, increased allocation from hedge funds as well as balanced/specialist funds, corporate action in the form of consolidation within the sector, and optimism around the vaccine rollout particularly in the UK which comprises a significant weight in the index.

SA Bonds (measured by FTSE/JSE All Bond Index) returned +1.9% in April bringing the year to date returns in the positive territory. Yields have softened during the month as the US Fed remains in no rush to withdraw monetary stimulus. What happens abroad, particularly in the US bond market, affects our market and therefore we have seen the 10-year yields rallying 45 basis points intra month. The Rand has been a supporting factor for SA bonds and the drivers behind the strengthening.

It has been a modest month for the CWM model portfolios, all up just over +1% except for CWM Income ending the month up +0.9%. Property exposure has helped performance for the models with a higher allocation to growth assets, both locally and globally. YTD and one-year returns continue to remain in the double digits, and this is supporting our longer-term numbers.

Over the five-year period, CWM Retirement Growth and Flexible have outperformed their peer group averages by +0.8% and +2.1% respectively. Underperformers such as CWM RI-Growth, Balanced and Defensive are on the road to recovery as the rotation into value persists. Conversely on the global side, our foreign house views continue to dominate performance given the weakening of the Rand coupled with the more robust offshore equity, property, and bond markets over the period.

The IMF is forecasting global GDP growth of 5.5% for 2021. Importantly, it also foresees sustained growth into 2022 and 2023 (4.2% and 3.8%, respectively). Evidence of economic green shoots was seen in April as the US earnings season kicked off with impressive results. At the time of writing, 284 of the S&P500 companies have reported, with aggregate earnings growth of 54% (compared to 1Q20). While base effects partly explain the outsized numbers, the aggregate “earnings surprise” number of 25% implies that – despite the low base – realised growth was more than double what had been expected. 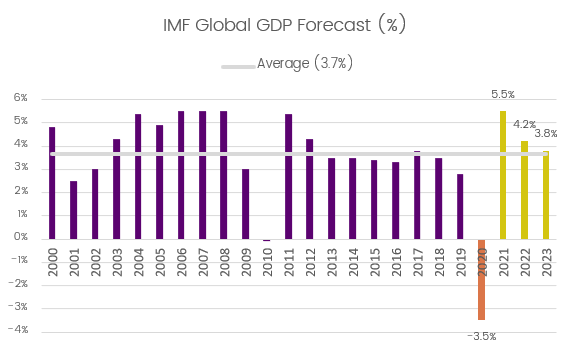 The re-opening of the global economy is encouraging consumer spending. A lot of pent-up demand can now be deployed, with the services sector primed as primary beneficiary. The US consumer is fit for the task, with a historic personal savings rate of 27.6% (thanks to an additional c.$2.8trn worth of recent stimulus). It’s no surprise, given the dynamics at play, to read CEO’s of companies like Whirlpool and The BlackStone Group wax lyrical about medium and long-term consumer demand. 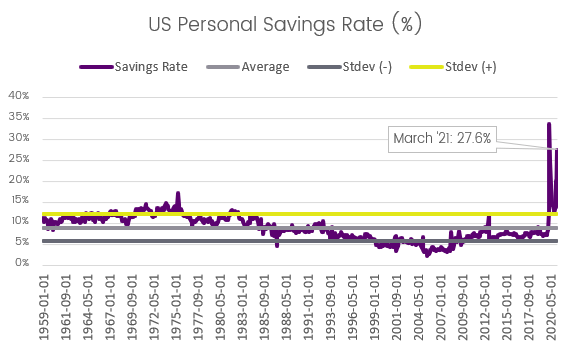 The demand uptick has reverberated down supply chains all the way to commodity producers and the prices of iron ore, copper, platinum and other industrial metals. Adding fuel to the rally, is a $2.2trn infrastructure plan President Biden intends to roll-out over the next ten years. The stimulus package looms large against a backdrop of an under-invested mining sector with a lead-time to add capacity of 7-10 years.

The demand-pull and cost-push dynamics had lead to rising inflation expectations and the spectre of higher interest rates. While such an environment is naturally detrimental to developed world bonds trading at historic low yields, it’s also a headwind to high growth stocks with lofty valuations. These (typically tech) companies are priced for a perfect macro backdrop and unfaltering growth. Any misstep forces investors to ask whether valuations are truly justified. For example, Netflix shares recently plunged by 7% due to subscriber growth falling short of Wall Street estimates (it was merely normalising to pre-covid trends) and expectations of only 1m new subscribers in 2Q21.

With a higher weighting to cyclical companies and sporting more modest valuations, emerging markets – and especially South Africa – look better positioned to absorb rising inflation / interest rates. The local resources sector is a good example of cyclical businesses offering value. It comprises roughly 35-40% of the total JSE market cap and trades at a forward PE of 6.1 – even as it stands to benefit directly from the global recovery and concomitant demand for materials. Enhancing its appeal is the current absence of big CAPEX projects (unlike during the “commodity supercycle” of the mid-2000’s). It implies significant free cash flows over the next 3-5 years that can be returned to shareholders in the form of dividends. 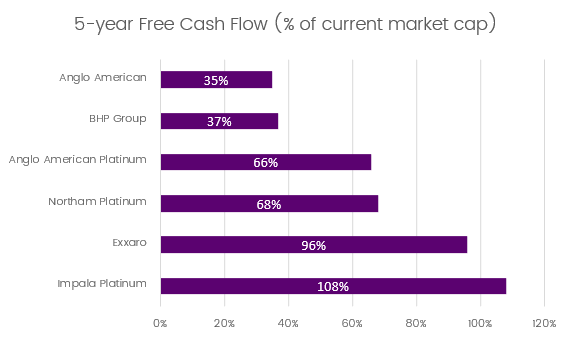 According to analysts, corporate SA has weathered the pandemic better than expected. Even after factoring in its impact on companies’ fair values, upside for the local market stood at +20% in 2Q20 (indicating that the market dislocation had been too severe). Fast-forward to 1Q21’s earnings season, the potential upside for the bourse has been upgraded to c.48%. While it may seem counterintuitive (given the rally of the last few months), the robust results by corporate SA has shown analysts to be too conservative in their fair value calculations.

But it was not only analysts who were conservative. The banking industry as a whole took a proverbial axe to their balance sheets, with ABSA, FirstRand, Nedbank and Standard Bank raising provisions for bad debts by an aggregate 130% in 1H20. During the period, profits before provisions actually grew by 4.4%. Looking forward, without having to rely on massive growth in advances or excessive cost controls, a simple unwinding of the large provisions should see earnings growth materialise that’s not currently reflected in prices. The industry trades at a forward PE of 9.9. 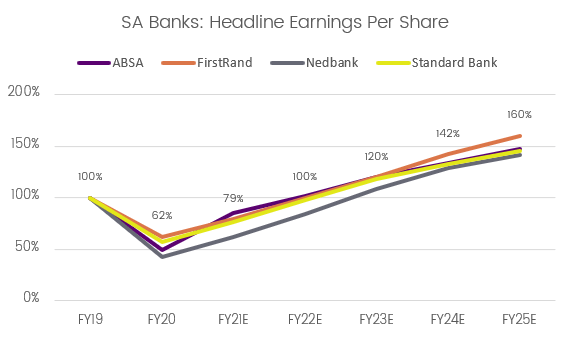 The outlook for asset classes is summarised in the table below: 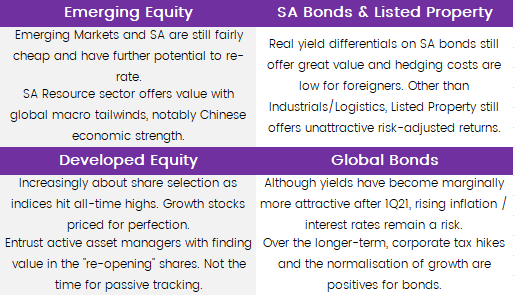